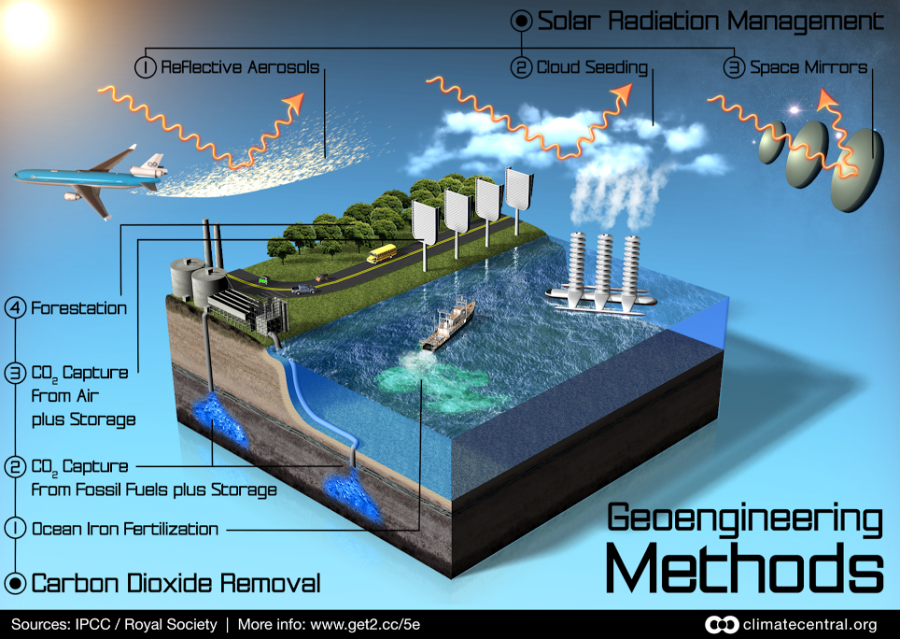 Global carbon emissions reached a record high in 2018, leading some scientists to conclude that a climate change tipping point is either at hand, or approaching rapidly. Among the many strategies discussed for handling this global crisis is a category of large-scale interventions known as geoengineering—the physical manipulation of the environment to alter the climate of the planet. Many of the ideas suggested by geoengineering proponents sound like the plans of James Bond villains. For example: seeding the ocean to encourage massive blooms of phytoplankton, pumping tiny aerosol particles into the upper atmosphere, putting walls around glaciers, and building a giant space mirror.

All of these suggestions are aimed at keeping the planet cool, either by blocking the sun’s radiation from reaching Earth, or by sequestering carbon. On paper and in computer simulations, they work, but they all face two major hurdles: cost, and unintended consequences.

Obviously, the cost of any undertaking that’s large enough to have an impact on the climate will be substantial. Even the more modest proposals—like adding iron to seawater to create a better environment for phytoplankton, which in turn improves CO2 sequestration—are very costly. This idea, known as Iron Fertilization, showed great promise initially, but it has been determined that the cost of the project, around $400 per ton of carbon sequestered, is considerably more expensive than carbon capture and storage (CCS). CCS is simply capturing carbon emissions at the source, usually sites of heavy industry, and placing them in long-term storage.

The most epic concepts, like putting a giant mirror in space to protect the Earth from solar radiation, also carry epic price tags. Estimates for a space mirror of sufficient size run into the tens of trillions of dollars, and it would quickly become the largest single object built by man. As cool as that sounds, it faces enormous infrastructural issues—the launch vehicles and construction platforms to complete such a project simply do not exist at this time. Governmental space agencies are slowly giving way to commercial space companies who could create the needed facilities, but how to make a giant space mirror profitable is still unclear.

The other, and perhaps more dangerous issue is the impact projects like these might have in the long run. Take for example the idea of seeding the stratosphere with sulfate particles to create ‘global dimming’ (a condition similar to the atmospheric cooling that follows a volcanic eruption). The particles would reflect sunlight, thus cooling the planet. A recent study of this process indicates that while it could have very positive effects—like decreasing the frequency and severity of the Atlantic hurricane season—it could also have very negative effects in places like semi-arid regions of Africa, which would dry out completely, leaving millions in danger of drought and starvation.
The ability of geoengineering to create such geographic winners and losers also raises the possibility of a rogue state attempting to weaponize these technologies. As the environmental situation becomes more dire, someone may decide that geoengineering the climate to benefit their particular region is worth the risk of damaging other continents, and take matters into their own hands. Obviously, further research is needed, and any attempt to modify the planet’s climate should be given due international consideration. Although this issue hasn’t received major press coverage yet in the US, it’s likely that it will soon. There is even one Democratic candidate for president (Andrew Yang) who has made research into geoengineering a part of his environmental platform.

For more information on giant space mirrors and other forms of planetary climate hacking, stay tuned to the Planetary Broadcast Network—your source for the news you need to be an informed citizen of this great democracy.