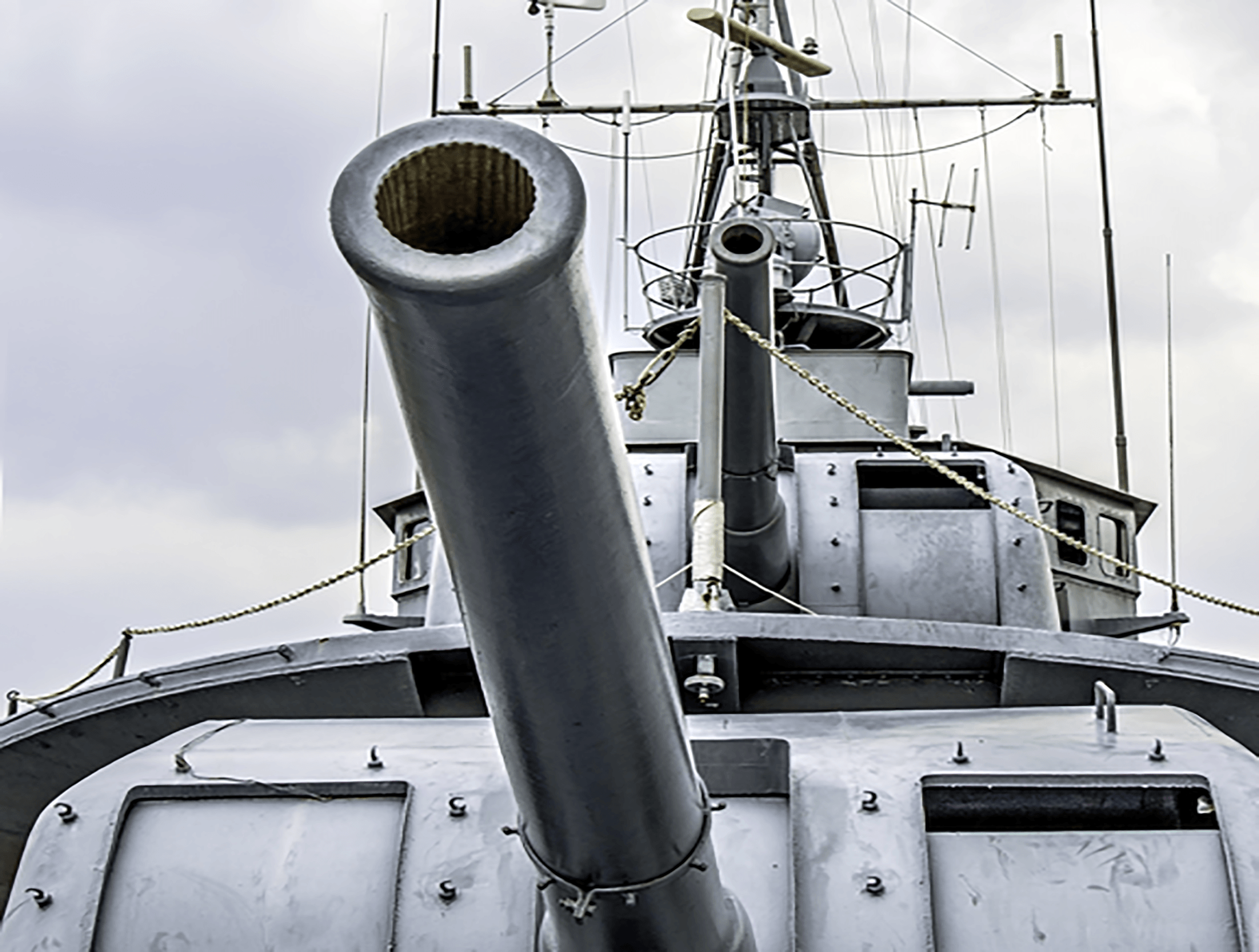 When US Naval forces start slugging it out with the ships of some newly-formed island nation, there have many weapons at their disposal. In the retro-futurist 1950s of Wavy Navy, the primary weapon for ship-to-ship combat is naval artillery (at least until they capture some weapons that are better…). The deck-mounted batteries on the Maine-York are the latest iteration in an arms race that has raged since the first small cannons were mounted on English ships during the Hundred Years War in the 1300s. The continual quest for guns with longer range, greater accuracy, and a higher rate of fire led to weapons capable of wreaking incredible havoc on both other ships and targets ashore. Let’s take a quick look at the developments that made the Maine-York’s guns possible.

Although there is evidence of ships in the classical era that had catapults, the wide-spread use of naval artillery didn’t happen until the late Medieval period. The English ship the Christopher holds the distinction of being the first ship to use cannons in a naval engagement, employing its three cannons against the French at the Battle of Arnemuiden in 1338. As other navies began to follow suit, the placement of the guns dictated their use; large guns in the bow or stern of a vessel were used for shoreline bombardment, while smaller pieces mounted along the sides of the ship served initially to repel boarders. Over the next few decades, shipwrights began to design ships with reinforced decks to support larger cannons. By the late 1400s the broadside volley had become viable, although it remained an anti-personnel tactic.

These guns were primarily mounted on or above the decks of galleys in elevated structures, which limited their size. Larger guns were common on land, but such weapons were powerful enough to cause dangerous rolling unless they were mounted below deck, closer to the waterline. As developments in sailing technique made rowers obsolete, galleys gave way to multi-mast war ships, with batteries of cannon in place of the oars. At this point, the broadside became the primary ship-to-ship tactic.

From the late 1500s through the mid-1800s, the tactics remained fairly static, but everything got bigger. The ships, the batteries, and the guns themselves all grew quite large during this period. For example, in the 1700s most European navies were based on vessels known as “ships-of-the-line”, ranging in firepower from 50-gun escorts up to 140-gun command ships. The most common, called “74s” because of the 74 guns on their two firing decks, were about 170 feet in length, and those guns fired iron balls ranging in size from 12 to 36 pounds. This entire armament could be fired 3 times every 5 minutes with a properly drilled crew. These ships dominated sea power until the steam era changed naval tactics.

Steam power was only an auxiliary drive system initially, allowing sailing ships to keep moving regardless of weather conditions, but by the late 1800s every European navy was building true steam-powered battleships. When wood gave way to metal as the primary ship-building material, the size of ships expanded dramatically. This continued into the mid 20th century, culminating with the Yamato-class battleships of the Japanese Imperial Fleet. At 862 feet in length and displacing 73,000 tons, these two ships (Yamato and Musashi) were the largest battleships ever built. Each carried nine naval cannons with a breech diameter of just over 18 inches; these colossal guns could fire shells weighing 3220 pounds at targets as far away as 26 miles!

The Maine-York is out there, sailing alongside behemoths like these—no wonder the other ships they encounter are so nervous and trigger-happy! Tune in to the Planetary Broadcast Network Evening News to follow the travels of the Maine-York, and to keep up with all the developing island nations around the world, as well as local news, weather, and sports. PBN—the news that informed citizens need to know!