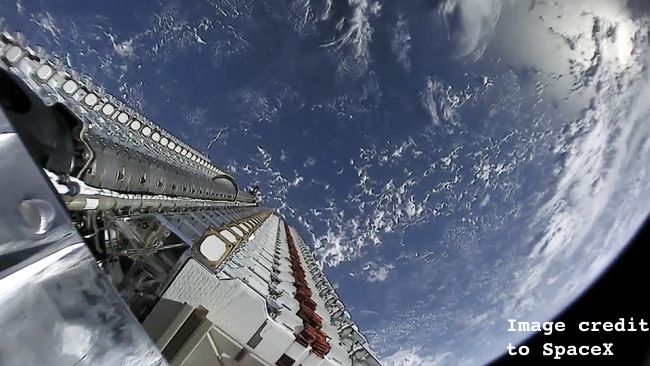 With the September 3rd launch from Cape Canaveral, SpaceX put 60 more Starlink satellites into low Earth orbit (LEO). Including the prototypes, the Starlink satellite constellation currently consists of 713 satellites, but it is expected to contain at least 12,000 of the 500-pound satellites by its completion in 2027. Paperwork has also been filed with the International Telecommunication Union to expand that number, bringing the finished constellation up to 42,000 units.

Putting 42,000 satellites into orbit is an ambitious goal for a company that completed its first satellite launch only a little over a decade ago (a Falcon 1 rocket put a Malaysian RazakSAT satellite into orbit on July 14th of 2009). To put this number in perspective, if the full Starlink project is completed, SpaceX will have launched eight times the total number of manmade satellites currently in orbit today.

The reason for putting such a huge number of satellites into orbit is to blanket the Earth with affordable high-speed internet access. In theory, such internet access will be cheap and ubiquitous—even the most remote areas will have solid access with very high transfer speeds. The interconnectivity of the satellites themselves is key to reducing latency and shoring up the productivity and dependability of the system—SpaceX calls these connections “space lasers”. According to SpaceX engineer, Kate Tice, two Starlink satellites equipped with this technology exchanged “hundreds of gigabytes of data” in a recent test. SpaceX designers believe that once these “space lasers” are fully deployed, Starlink will be the fastest data transfer service in the world.

If an additional 21 million pounds of hardware in LEO sounds like a bad idea to you, you’re not alone. Scientists and space watchers agree that such a density of equipment increases the risk of collisions. In May of 2019 the European Space Agency (ESA) had to make an unscheduled maneuver of its Aeolus satellite to avoid a collision with a Starlink satellite. Such a collision runs the risk of not only destroying both satellites, but of creating a debris field filled with bits and pieces of space junk too small to track, but large enough to set off a cascade of collisions. In a worst-case scenario, such a cascade event could leave the Earth ringed by so much high-velocity space debris that it would be impossible to safely launch through it. Starlink engineers claim that autonomous anti-collision protocols in each satellite will minimize the possibility of collisions, but the 2019 incident was exacerbated by miscommunication between the ESA and SpaceX—an inauspicious beginning to the forthcoming LEO traffic jam.

Another problem posed by the megaconstellation is light pollution. Astronomers were appalled to see how bright the early Starlink satellites were—some estimated that the visible satellites of the completed megaconstellation would outnumber the visible stars, and seriously hinder both optical and radio-telescopic observations. Further complicating the matter is the anti-collision system mentioned above. Because Starlink satellites can change their orbits autonomously, astronomers can’t schedule their periods of observation to avoid them.

SpaceX has responded to these complaints by experimenting with several different modifications to mitigate light pollution. These include a deployable sunshade, low-reflection coatings, and improved access to satellite tracking data so scientists can better coordinate their observations.

Assuming all of these issues can be satisfactorily addressed, it’s likely the completed Starlink megaconstellation will change telecommunications in ways that we can’t even begin to foresee. If you’re thinking now might be a good time to purchase SpaceX stock, think again. SpaceX is a privately held company, with a few very lucky investors. Elon Musk has made it clear that the best way to keep short-sighted investors from derailing his goal of colonizing Mars is to avoid going public with SpaceX, so don’t expect an IPO any time soon.

For more space and technology news stay tuned to the Planetary Broadcast Network. At PBN, we look forward to beaming our reports to you via Starlink, so that no matter where you are on Earth, you can’t escape the news!