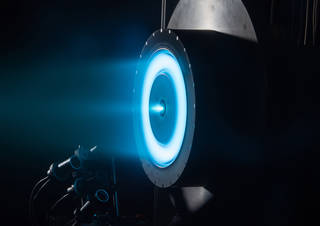 As we mentioned in our last installment, the BepiColombo mission reached Mercury with the aid of solar electric ion thrusters. If that sounds to you like something that should be mentioned on the bridge of your favorite fictional TV starship, you are not alone. Solar electric propulsion (SEP) has been used on a number of successful vessels launched by NASA and other space agencies, but it has never gotten the kind of press coverage that chemical rocket engines get.

Although the “Resistojet” or “Variable Specific Impulse Magnetoplasma Rocket” may not have the same rock star name recognition as the Apollo program’s Saturn V, they are the technologies that have made many of the long-range missions of the last few decades possible. SEP allows deep-space craft to use smaller launch vehicles and carry more cargo while decreasing the need for chemical propellant by as much as 90%. While this is important from an engineering standpoint, it is crucial on the political side of mission planning. SEP makes these missions cheaper, and that is increasingly important to both governmental and private sector space agencies.

Experts on SEP, like those at NASA’s Glenn Research Center, claim that solar electric technology is the key to getting human-crewed vehicles to destinations out beyond the moon. It will also figure prominently in robotic missions, including exploration of distant bodies as well as cargo-hauling missions to provision and resupply future bases and orbiting stations. Barring any sudden technological breakthroughs, it appears that SEP is the propulsion of the next phase of space exploration.

To get us all up to speed—what is SEP, and how does it work? At its simplest, SEP refers to the combination of solar cells and electric thrusters to propel a spacecraft. There are a number of types; today we’ll take a look at the current workhorse of NASA’s SEP project, the Hall thruster.

In 1879, Harvard physicist Edwin Hall discovered what is now known as the Hall Effect. Simply put, when you introduce a magnetic field perpendicular to an electrical current, a voltage (known as Hall voltage) can be measured at right angles to the direction the current is flowing. Hall thrusters make use of this effect to ionize propellant and then accelerate those ions to produce thrust. A number of different propellants are possible, including adamantane, argon, bismuth, iodine, magnesium, and zinc, but currently the most commonly used are xenon and krypton. The result is a very efficient thruster that can operate very inexpensively, for long periods of time without refueling.

Research on Hall thrusters has been ongoing since the 1960s. They were first put to use as positioning thrusters by the Soviets, on a Meteor-class weather satellite launched in 1971. Since then, many Hall thrusters have seen service on vehicles launched by space agencies all over the world. As the technology has become more efficient, dependable, and cost-effective, Hall thrusters have enjoyed increased commercial use. For example, Elon Musk’s Starlink constellation, which is nearly 1800 satellites and still growing, uses Hall thrusters. That is clearly a ringing endorsement of SEP. Given Starlink’s intended size of 42,000 satellites, a LOT of Hall thrusters will be in orbit in the not-too-distant future.

This reporter is not a career counselor, but it seems safe to say that if you’re a young person, planning for a job in the exciting world of space propulsion, start studying the work of Edwin Hall and the thrusters that bear his name. It seems likely that knowing your way around a Hall thruster might be a real plus when you go hunting for a job.

Stay tuned to the Planetary Broadcast Network for more info on SEP and the other technologies that you need to know to be an active participant in our democracy, both here and in space.